Most people will think vikings, icy winters and unlimited supplies of streaky bacon at the mention of Denmark, but actually the tiny northern european country sports some rather exciting beach resorts as well. One of those is Søndervig, located on the western coast of Jutland, and within easy driving distance of the airports in Billund and Karup. In itself Søndervig is a tiny town cuddled in just behind the sand dunes protecting the flat field of Jutland from the roaring north sea, but in the summertime its quite a busy little resort with some of the most marvellous sandy beaches in northern Europe.

The danes are fairly strict about protecting their nature and as such you wont find any developments, beach bars or hotels on the actual beach. The downside to this of course is the lack of beer or meals with a sea view, but on the upside it means passing from the resort over the dunes reveals kilometer after kilometer of undisturbed sandy beaches. The only buildings on the beaches are bunkers left behind by the german invaders during the second world war, it appear Hitler had little regard for danish building regulations. Staying close to Søndervig itself, the sand beach will be rather full of skinny dipping tourists and couples making out in the dunes, however if you want undisturbed peace and a sandy beach all to yourself you merely have to walk a couple of kilometres in either direction.

In terms of organisation and functional facilities nobody matches the danes. Everything is clean and tidy, there are plenty of informational posters, guides and info stands readily available in several languages, public toilets are conveniently located and kept clean etc. On top of these official facilities the Søndervig beach resort has a strong selection of restaurants featuring steak houses, traditional danish meals at the inn, italian pizzas and pasta as well as trendy café offerings. On the entertainment front theres nightclubs, bodegas and bars to cater for your thirst and cravings to show off your suntan on the dancefloor. The most popular nightclubs would appear to be Brændingen sporting a classic disco style and 60eren for the slightly older audience.

Now its all well and good with sandy beaches, but Denmark is known to be rather cold and rainy for most of the year and indeed you dont get the same guarantee of blistering sunshine at all times as you would have in a mediterranean or caribic resort. However, danish summers tend to be mainly warm and sunny, and on days where the beach doesnt seem appealing there are plenty of other activities to explore in the area.

Dont cheat yourself of a visit to the annual sand sculpture festival located within the town borders of Søndervig. Sand artists from all over the world compete every year and create amazing sculptures in the sand, that are then put on public display. Its cheap and quite an impressive experience. If you fancy trying your luck fishing Søndervig has plenty of options too. You can either try your luck with heavy equipment in the actual ocean or pay to have a nice and relaxing time at one of the many local put and take lakes, where catching a trout or two is more or less guaranteed.

One of the newest additions to the entertainment industry round Søndervig is the amazing Adventure Park (formerly Adventure Golf). The main feature is a form of golf that mixed real golf with minigolf in a fantastic themepark setting which will prove entertaining and challenging for families with kids of all ages, experienced golfers and people who never held a golf club in their life before. However this creative new form of Adventure Golf isnt the only thing on the menu at the Adventure Park, you can play Minigolf and an exciting form of Football Golf. Theres a FUN4all Game Room and a decicated Playland along with Shooting Simulators and all sorts of sports integrated in a fantasy wonderland type of setting. This place is certain to bring days of entertainment and pleasure to any and all families who love a bit of sports and scenery out of the ordinary. To top it all off, unlike most things in Denmark, the Adventure Park is surprisingly cheap, which is really rather surprising as it must have involved massive investments to establish this little piece of sports Narnia in a beach resort – but you really should take advantage of it and grab the family for a fun day at the Adventure Park Søndervig 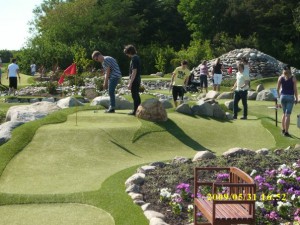 Once youre done playing around in the Adventure Park (if its actually possble to stop), we would recommend a trip into the historic town of Ringkøbing. Located a short 15km drive inlands by the lagoon, Ringkøbing is a very traditional danish town with ancient buildings, museums and a charming little city centre with outdoor cafees and narrow streets.

Now theres plenty of good reasons to try a beach holiday in Søndervig, especially if you are happy to explore other activities than sunbathing on days when the weather is too cloudy or cold. However, Denmark is excessively expensive compared to most other destinations, so you need a solid wallet to finance a pleasant vacation in Western Jutland which might deter a fair bit of the crowd that would otherwise consider it an alternative to greek, spanish or french beach resorts. If you have a bit of cash, Søndervig is lots of fun and caters for all your needs though.